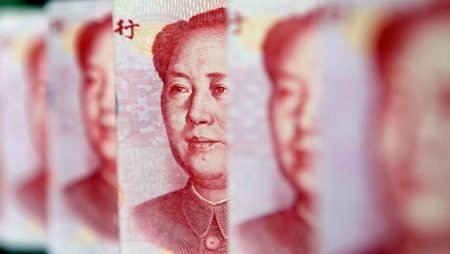 Investing.com– China’s yuan fell the most among Asian currencies on Wednesday following a report that the U.S. was considering sanctions against Beijing to deter an invasion of Taiwan, with regional units also pressured by higher-than-expected U.S. inflation data.

The sank 0.7%, coming close to a two-year low, while most other Asian currencies were pressured by a stronger dollar and growing expectations of more sharp monetary policy tightening by the Federal Reserve.

A suggested that the U.S. was considering sanctions against China to deter it from invading Taiwan, with Taipei also pressuring the European Union to do the same.

While the discussions are still at an early stage, any new sanctions against China threaten to severely dent relations between Beijing and the West.

Sanctions against China would also be devastating for global trade, given the country’s key role in the supply chain for several industries. Tensions between the U.S. and China are already heightened this year after several U.S. diplomats visited Taiwan, which Beijing claims is part of its territory.

Broader Asian currencies retreated as the dollar surged to near 20-year peaks after the U.S. inflation reading. showed that U.S. inflation is not cooling as quickly as initially thought, putting more pressure on the Fed to keep hiking interest rates.

Both the and traded sideways on Wednesday, after stellar gains in the prior session.

The was among the worst hit by the inflation reading, slumping over 1% on Tuesday and coming close to 24-year lows. The currency is among the worst-performing Asian units this year due to a growing rift in interest rates.

While Japanese ministers have said they will look to curb the yen’s losses, no clear measures have been undertaken so far.

Asian currencies have fallen sharply this year as a series of interest rate hikes by the Fed drove capital away from risk-driven markets.

Investors are now pricing in a that the Fed will raise rates by 75 basis points again next week.