Swiss luxury firm Richemont extended its rally for a fifth day, up 0.6% to an all-time high, after a slew of price target raises by brokerages.

European stocks have eked out small gains this week to stay near record highs as strong earnings and signs of economic momentum counteract concerns around a fresh COVID-19 surge in Europe and inflation.

Data showed euro zone inflation rose to more than twice the European Central Bank’s target in October, with more than half of the jump due to a spike in energy prices.

“While we don’t expect services inflation to rise a lot further, high input costs will push goods inflation up in the near term.”

The price of gas next month in the Netherlands, which is considered to be a benchmark for Europe, jumped almost 8% on Wednesday to hit 101.30 euros per megawatt-hour (MWh), its highest since Oct. 18.

“The longer the shortfall of Russian flows into Northwestern Europe lasts, the longer… gas markets will have to rely on high gas prices,” said Goldman Sachs in a note.

Reporting by Anisha Sircar and Shreyashi Sanyal in Bengaluru; Editing by Shinjini Ganguli and Alexander Smith 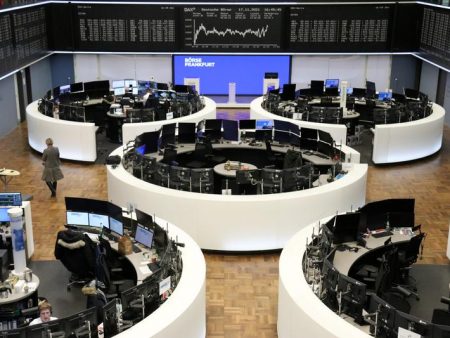